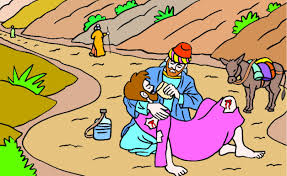 The Parable of the Good Samaritan is probably Jesus’ best-known parable. I would put its public awareness slightly higher than that of the prodigal son. It’s a concept that is known the world over and is even enshrined in civil law. It was the theme of the last Seinfeld episode. The idea of being and needing a “Good Samaritan” is in our cultural DNA. Here’s what I want to say: most of us don’t get the parable or understand the irony at the heart of the term “good Samaritan.” What Jesus, the guy we follow, meant by the idea of a Samaritan, and we mean by a Samaritan are two different concepts. When we read, teach, or preach this passage, we invariably see ourselves as the Samaritan. We are not the Samaritan. That’s not how Jesus wanted his 1st-century listeners to encounter the story. We’re the man traveling the road from Jerusalem to Jericho, half dead, dying in the ditch. We are waiting for the Samaritan. And believe it or not, the Samaritan is the last person we want to see.

Nobody liked the Samaritans. They were heretics to mainstream Judaism. Living in the isolated region of Samaria, they’d been gone so long and doing their own thing, they were the despised, unclean cousins of Jesus’ temple Judaism. From their worship practices to how they interpreted scripture, they were different. Those who called the shots couldn’t live with different. Different had to be shunned, isolated, and abandoned. I can’t say this any more precise: the majority of people (in Jesus’ day) hated the heretic Samaritans and the Samaritans knew this.

As much as we want to describe ourselves as life-saving Good Samaritans; most of us have never lived as reviled actual Samaritans. In truth, very few of us have ever been assaulted and left for dead. Yet, we do represent the religious mainstream, the dominant theological culture of one form or another. That gives us some perspective on the story. Let’s read and listen to this passage with our 1st-century eyes and ears. Were we to need help, who would our Samaritan, be? Perhaps your Samaritan would be Donald Trump or Colin Kaepernick or Megan Rapinoe or Mitch McConnell? Who is the last person you would want to stop, expect to stop, and then care for your injuries? That’s your Samaritan. I may be your Samaritan. This is what Jesus is trying to tell us. Will our culture wars end when we start seeing everyone who annoys us as potential Samaritans? When we meet our Samaritan walls go down and relationships are formed. I don’t know. It does sound like the kind of idea Jesus might endorse.