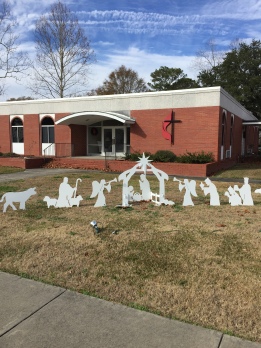 I love the Nativity story not because it is warm and fuzzy, but because of its overall message of perseverance against cruelty. Whether it’s the abject cruelty of Herod’s population policies or the brutality of the innkeepers “no,” at each step of the way, Joseph, Mary, and Jesus overcome seemingly insurmountable challenges.

That’s the Christmas I know and love. No, this is not the Christmas where you’re worried about perfect food, decorations, or guests. I’m talking about the one where the abject cruelty of the world has attempted to intervene somewhere between God’s love and salvation only to realize that goodness triumphs over evil.

The original Christmas story is an overwhelming experience. To see the forces of light and dark play themselves out can be frightening and exhilarating. Here, before our eyes, the very emotions, ideas, and people in which Jesus spoke come to life. Will we respond in a way consistent with the gospel? Will we do justice amidst the injustice that surrounds us?

The phone rang at my office, mid-morning. The caller id said his name was Eddie. When I answered, he said he was out of gas. Stuck in the parking lot of the Piggy-Wiggly, he might have enough to make it to the gas station down the street. Could I help him? He’d been here for work that fell through, and now he needed to get back home, which was at least a couple of hours down the road.

I met him at the gas station. Eddie was working on checking his oil and power steering fluid. He wanted to take care of this minivan. It was also his home. In the place he parked, he risked the van being broken into at night, damaged, and parts robbed. He needed new windshield wipers.

That would mean a trip to the auto parts store. We drove across the street from the gas station. Eddie was able to find some oil, power steering fluid, and wipers. The men from the shop even helped us install the wipers. If it rained, he could see. His home would be safer on the small, two-lane roads he’d be traveling.

“I’m going to make it,” he said. “I have to keep trying.” I suspect those same words came from Joseph and Mary as they traveled to and from Bethlehem.

Christmas looks like many things. Our sanitized images of mangers, stables, babies, parents, and wise men are one set of pictures. Our love of tradition should not cause us to forget the reality which brings us together in Advent and Christmas. I think Christmas also looks like my encounter with Eddie. It is unpredictable and sometimes tragic. Christmas is good people struggling against poverty, homelessness, and trying to make a place in a hostile world. That’s the essence of the Christmas story found in the Gospels. If we can’t see the modern aspects of the ancient Christmas story, then we’re missing an opportunity to appreciate the Incarnation of Christ. We’ve become a obstacle to the Gospel instead of a means of sharing the message. Nobody wants to be an obstacle, especially at Christmas. Help someone along, past the Christmas barriers we’ve created so that the Incarnation may be the most visible reality in our world.

View all posts by richardlowellbryant

SHINE OF A LUCID BEING

Astral Lucid Music - Philosophy On Life, The Universe And Everything...